On QC shootout -- a justified killing incident or not?

First of all, Cpl. Winston Ragos, may you rest in peace.

It’s a sad event that during ECQ, someone defenseless and essentially harmless was painfully killed in broad daylight. I just can’t fathom the fact that people celebrated and even justified the killing, setting aside their common sense and morals. Have we reach that point wherein we can now decide who lives and who won’t? Does the act of reaching his sling bag truly justify the reaction of the police on the defense of unlawful aggression?

Your opinion may differ and I’d like to hear (read) it.

Edit: You may find this helpful in understanding the event. Notice the timestamps. https://www.facebook.com/kalentongrepresent/posts/3094212033977080

Yes. The police, based on the videos, is totally justified for firing those 2 shots.

The cpl. should have complied with the verbal instructions and presented his hands open to the police showing clearly that he does not have the ability to do harm to the officers, to himself, and others.

It’s an unfortunate incident, but the police just did their job and did it correctly.

I do not know all the facts, but there should be better alternatives than to simply justify why the police killed a civilian. The debate can go around in circles, but a life has already been taken. Walang justification or excuse should make that acceptable.

Besides, this happens too often in this regime. The police has been empowered to shoot anyone they consider a threat. No Filipino should die in such a tragic and meaningless way.

In the real world, there’s “justified” killing. Most common examples are self defense and soldiers at war.

Sadly justified, not sure though if liable for civil damages, pero criminally it was a lawful shooting.

It is a justified shot. Unfortunately and sadly, he was killed.

If you can see the video, madaming tao around the area. What if baril nga ang meron sya sa bag?---- Eh di mas madami pang nadamay---- given that this guy is warshocked pala and with schizo (this one naman hindi alam ng mga police—but this also makes the guy more dangerous.)

Here’s the video. (Mod please remove if not allowed)

Correct. Florendo and his cohorts only allege that Ragos could have been drawing a gun from his sling bag. And they chose to shoot Ragos twice without Ragos actually drawing or brandishing or pointing a gun at anyone based on the video. Hence, they cannot claim that there was “unlawful aggression” on the part of Ragos.

Florendo and his cohorts, all visibly armed, could have just physically subdued Ragos when he had his back turned away (nakatalikod) and had his hands up in the air.

In People v. Borreros, Supreme Court ruled that for unlawful aggression to be attendant, there must be a real danger to life or personal safety. Unlawful aggression requires an actual, sudden and unexpected attack, or imminent danger thereof, and not merely a threatening or intimidating attitude x x x. Here, the act of the deceased of allegedly drawing a gun from his waist cannot be categorized as unlawful aggression. Such act did not put in real peril the life or personal safety of appellant. ( G.R. No. 125185, May 5, 1999, 306 SCRA 680, 690)

“…mere thrusting of one’s hand into his pocket as if for the purpose of drawing a weapon is not unlawful aggression. Even the cocking of a rifle without aiming the firearm at any particular target is not sufficient to conclude that one’s life was in imminent danger.” 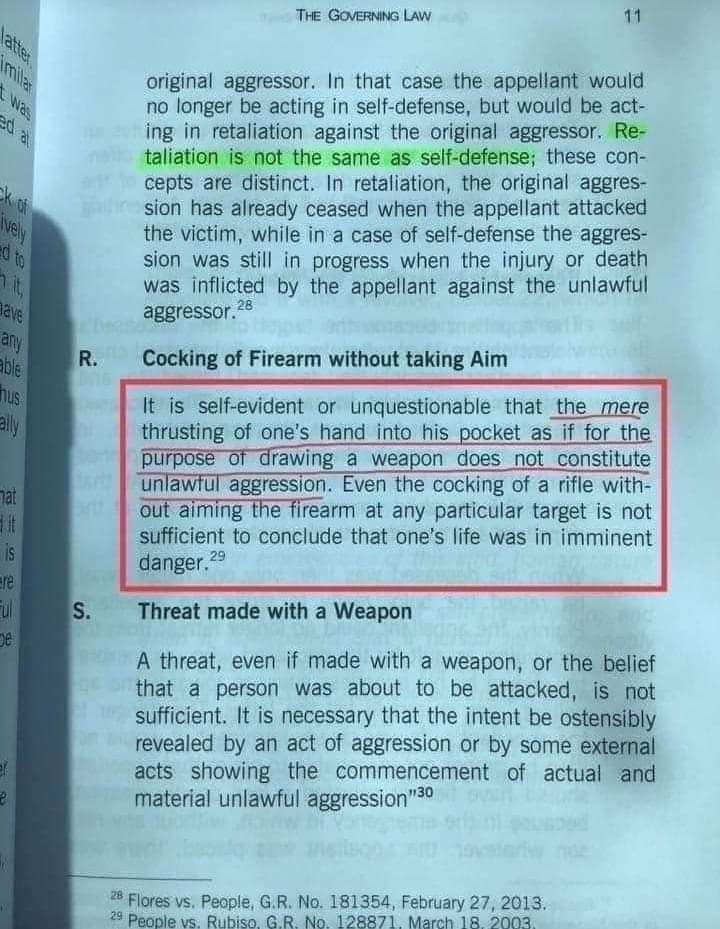 Unfortunately and sadly, he was killed.

There wasn’t any good or bad fortune here, the Florendo and cohorts had choices how to approach and handle this situation without casualty. Justice must be served.

“What ifs” would not hold up in court; this is a counterfactual fallacy.

given that this guy is warshocked pala and with schizo

PTSD and schizophrenia are illnesses, not “clear and present danger”. Ragos was being treated for these at Veterans Medical Memorial Center.

There wasn’t any good or bad fortune here, the Florendo and cohorts had choices how to approach and handle this situation without casualty. Justice must be served.

And probably among the choices that they had, it was the best choice given the situation. Yes, justice must be served. Bad choice of shooting him in the chest.

“What ifs” would not hold up in court; this is a counterfactual fallacy.

I agree on that, this can’t be justifiable on court— this is just my personal view, that I’d rather shoot one man than to put others in danger. So yeah, if I am in that situation, I will end up in jail.

PTSD and schizophrenia are illnesses, not “clear and present danger”. Ragos was being treated for these at Veterans Medical Memorial Center.

Yes , I agree that these are illnesses and it saddens me that he got these because he served our country during the Marawi Siege. Given his current status, why did his family members allow him to go outside? Is he on his way for a check up or something? Sorry to say, I was a victim of a warshocked US marines (just death threat of me and my kids, because I didn’t went on a date with him). And I must admit that my response to this situation is also affected by that experience.

I think failure of seeing the whole situation. I don’t know exactly what’s on the mind of the policemen. Guess they are also stressed, we all are. Sa palagay ko, di gustong makapatay ni Florendo. He instinctively shoot Ragos. Sana nga other parts ng katawan niya ang tinamaan. Maybe there’s a lapse in the decision where to shoot. I can’t tell. The action (shooting) maybe justified but the result (killed) was not intended.

And also like me, takot talaga ako. It’s not that I am not aware, of the disease, it is like paano ako magdedeal sa mga taong may ganito?

I don’t know exactly what’s on the mind of the policemen. Guess they are also stressed, we all are.

We can only assume…maybe fear, panic, an itchy trigger finger? What I know is there’s a standing order (given in jest, taken out of context or whatever) to shoot any violators of the ECQ on sight…it might not have directly affected Florendo’s decision but it was clear from the video that his posture showed that he clearly was intending to carry out that order regardless of an establishing reason to shoot Ragos down…in short there were a lot of enabling factors primary of which was the tone from the top which could have been communicated as maximum tolerance for ECQ violators but the leadership communicated more harsh measures…

Sorry to say, I was a victim of a warshocked US marines (just death threat of me and my kids, because I didn’t went on a date with him). And I must admit that my response to this situation is also affected by that experience.

I understand your points, and thank you for sharing your experience. I can only imagine how frightening that was for you and your family. I’m sure that you formed your opinion with the good intention of not wanting others to be in that situation of possible harm/violence.

I just hope that reason will prevail in the investigation (and consequent trial) and not just speculations and manipulation from those in the position of political power and influence.

I am hoping that justice will prevail. I am also saddened by the fact that he was killed

Kelangan makita na baril yung hawak? This is the real world. When you’re unsure, preserve your life and the lives of others.

The policeman did NOT shoot the man’s head. He shot the body, and the called for an ambulance. If the intent was to kill, he would have shot him in the head or shot him more than 2x and not bother call an ambulance.