DND exits deal requiring prior notice for counterinsurgency operations in UP...

MANILA, Philippines—The Department of National Defense (DND) has unilaterally terminated a 1989 agreement with the University of the Philippines (UP) requiring prior notification to school officials

MANILA, Philippines—The Department of National Defense (DND) has unilaterally terminated a 1989 agreement with the University of the Philippines (UP) requiring prior notification to school officials for police and military to enter UP campuses, signalling an intent to deploy, but not post, state security forces for counterinsurgency operations in the state university.

JUST IN: In a letter addressed to UP Pres. Danilo Concepcion, Department of National Defense (DND) Secretary Delfin Lorenzana says the UP-DND Accord, an agreement that keeps state forces from entering the premises of the University, is terminated effective January 15. #DefendUP

I don’t know what the AFP and PNP is hoping to accomplish with this. The latter’s already poor reputation will likely not be affected. The former however will definitely take a hit.

I am acknowledging receipt of your letter of 15 January 2021 informing me of the unilateral abrogation by your office of the agreement signed on 30 June 1989 by then DND Secretary Fidel V. Ramos and then UP President Jose V. Abueva—an agreement that, you will recall, established certain norms and protocols governing relations between the University and military and police forces.

I must express our grave concern over this abrogation, as it is totally unnecessary and unwarranted, and may result in worsening rather than improving relations between our institutions, and detract from our common desire for peace, justice, and freedom in our society.

That agreement was forged with the formalities that attend the execution of agreements, imbued with the highest sense of fidelity of the parties. It was grounded in an atmosphere of mutual respect, which we were able to maintain for 30 years through the observance in good faith of its provisions. With few exceptions, protocols were observed and any problems or misunderstandings were amicably and reasonably resolved. The agreement never stood in the way of police and security forces conducting lawful operations within our campuses. Entry was always given when necessary to law enforcers within their mandate.

We regret that the agreement was abrogated unilaterally, without the prior consultation that would have addressed the concerns you raised in your letter. Instead of instilling confidence in our police and military, your decision can only sow more confusion and mistrust, given that you have not specified what it is that you exactly aim to do or put in place in lieu of the protections and courtesies afforded by the agreement.

Perhaps this will be a good opportunity to emphasize that we sought and secured that agreement not to evade or weaken the law, but to protect the climate of academic freedom—guaranteed by the Constitution—that makes intellectual inquiry and human and social advancement possible. We want to maintain UP as a safe haven for all beliefs and forms of democratic expression. In that, all the signatories to the agreement believed and bound themselves to uphold.

Our University community does not and cannot fear the fair and speedy enforcement of the law, and we value and appreciate the contributions of our uniformed services to our safety and security. We do not condone sedition, armed insurrection, or the use of violence for political ends.

At the same time, especially given our experience of martial law, we must reject any form or semblance of militarization on our campuses, which will have a chilling effect deleterious to academic freedom. This abrogation endangers the goodwill necessary for both of us to achieve our mission as responsible members of the same national family.

Our police and military authorities should have no fear of academic freedom. Indeed UP has bred rebels and nonconformists—as well as it has bred presidents, senators, congressmen, and business, civic, and even military leaders. All the world’s great universities have produced the same range of thinkers and doers. By and large, intellectual and political dissidents in UP have always been in the minority, but it is a critical minority that has historically been vital to the maintenance of a healthy democracy.

Left in peace, UP will continue to be a major contributor to the country’s development and to its national leadership in all fields. Its most recent international ranking—65th among the 489 universities in Southeast Asia evaluated by the Times Higher Education Asia University Rankings—attests to the high quality of its achievements.

That performance, Mr. Secretary, is the result of its exercise of academic freedom—the freedom to think, to probe, to question, to find and propose better solutions.

May I urge you, therefore, to reconsider and revoke your abrogation, and request further that we meet to discuss your concerns in the shared spirit of peace, justice, and the pursuit of excellence.

Robredo: Termination of UP-DND accord aimed at striking fear among dissent

The Department of Defense’s unilateral termination of its 1989 accord with the University of the Philippines, which bans the presence of police and military in the UP campus without prior notice, is about sowing fear instead of law and order, Vice...

“If this was simply about law enforcement, all the Accord asks is that military authorities give notice to University officials before any operations in UP. This is neither a difficult nor onerous rule, and five Presidents since 1989 have managed to protect both the UP community and the Republic without breaking it,” Robredo said. 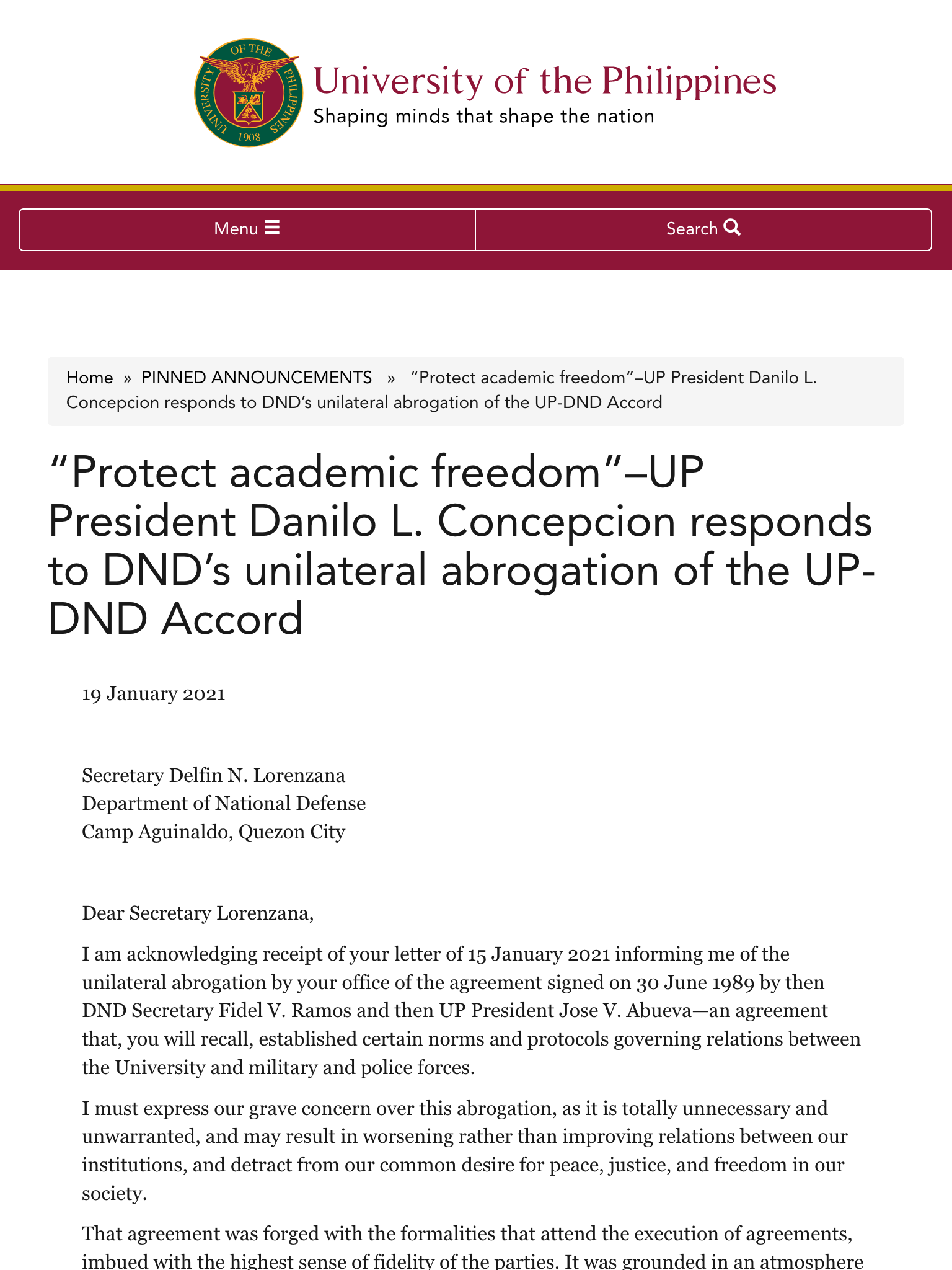 And here’s a Wayback Machine copy for historical purposes.

So Lorenzana pompously wants the UP President to explain why several UP students wound up dead in encounters. Apparently Lorenzana has no idea and concept of free will and thinks a systematic...

So Lorenzana pompously wants the UP President to explain why several UP students wound up dead in encounters. Apparently Lorenzana has no idea and concept of free will and thinks a systematic conspiracy exists in UP abetted by the university administration. That being said, perhaps one can ask the PMA Superintendents why hazing keeps on claiming the lives of cadets every now and then in the academy, why generals who are PMA grads keep on getting implicated in multibillion peso corruption cases even up to this very moment, and why other PMA grads are accused of human rights violations and some may end up being charged with crimes against humanity.

Minsan mapapaisip ka na lang if all our officials think that way talaga, or they’re just emulating how their boss wants them to think.

What’s sad (and disturbing) is how their followers, supporters, believers, fanatics (?) echo this thought. UP alumni at that.

You folks need to understand that not everyone who went to UP will have the same opinions or values as you do.

The UP admin has failed or rather chose NOT to safeguard its students from communist-terrorist recruitment.

You folks need to understand that not everyone who went to UP will have the same opinions or values as you do.

Agree. Which is why I don’t understand why the DND is taking the UP Admin to task if people have free will and difference in opinion contrary to the government? UP only gives the students the skills and training. What they do with it and on their own time is up to them.

Agree. Which is why I don’t understand why the DND is taking the UP Admin to task if people have free will and difference in opinion contrary to the government? UP only gives the students the skills and training. What they do with it and on their own time is up to them.

Fratmen kill rivals on their free will. But the UP admin will kick them out and charge them criminally if they did it.

Fratman X of Frat A, kills Fratman Y of Frat B. UP kicks out Fratman X, but leaves Fratman Z of Frat A. What are you talking about?

Point is… UP Admin deals with frat violence… They’ve created policies in hope of preventing it, and should it occur still, acts on in definitively… They’re also been very open about this and publicly denounces very strongly frat violence.

Now tell me which is worse?

So Concepcion has a hand in NPA in recruitment? 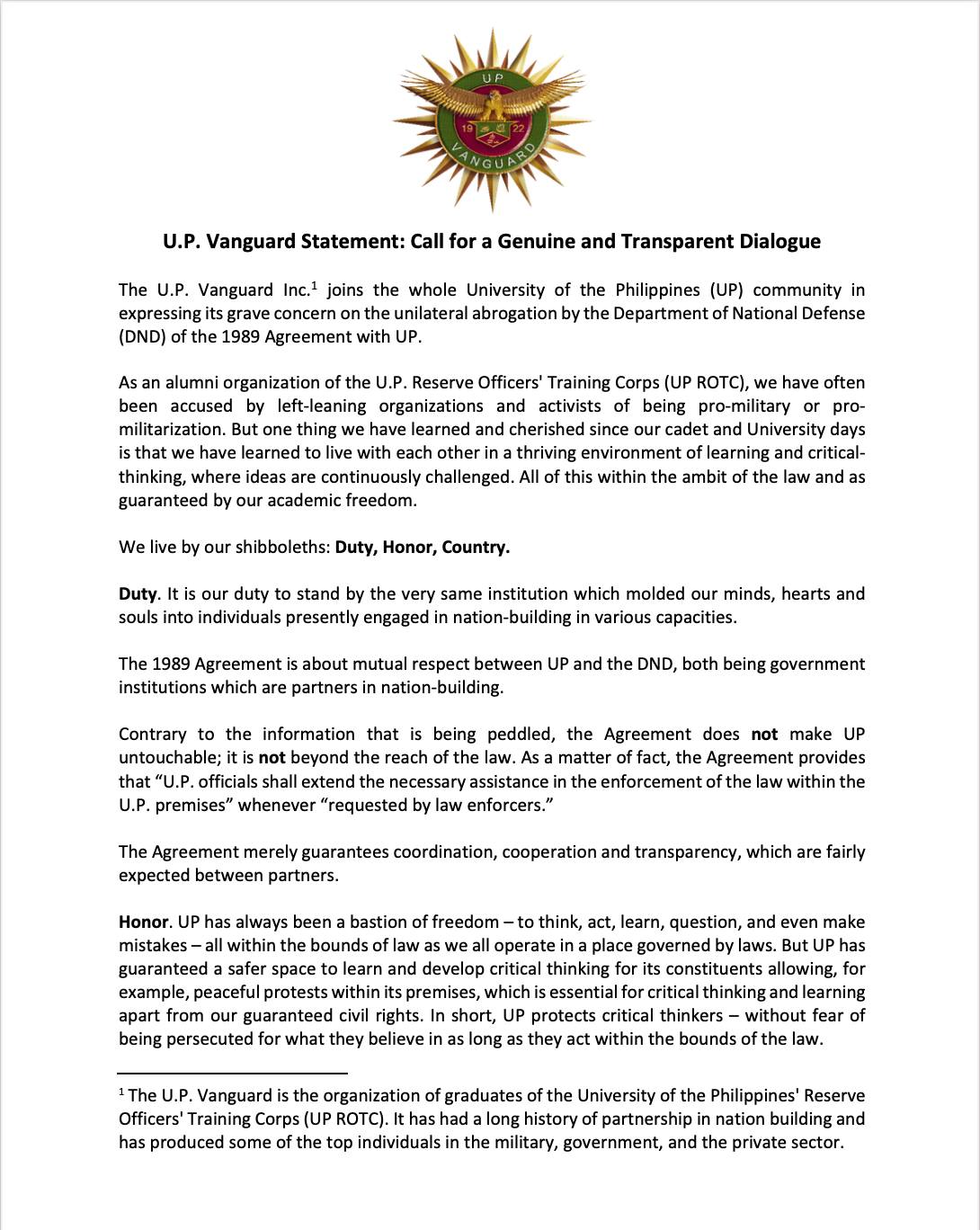 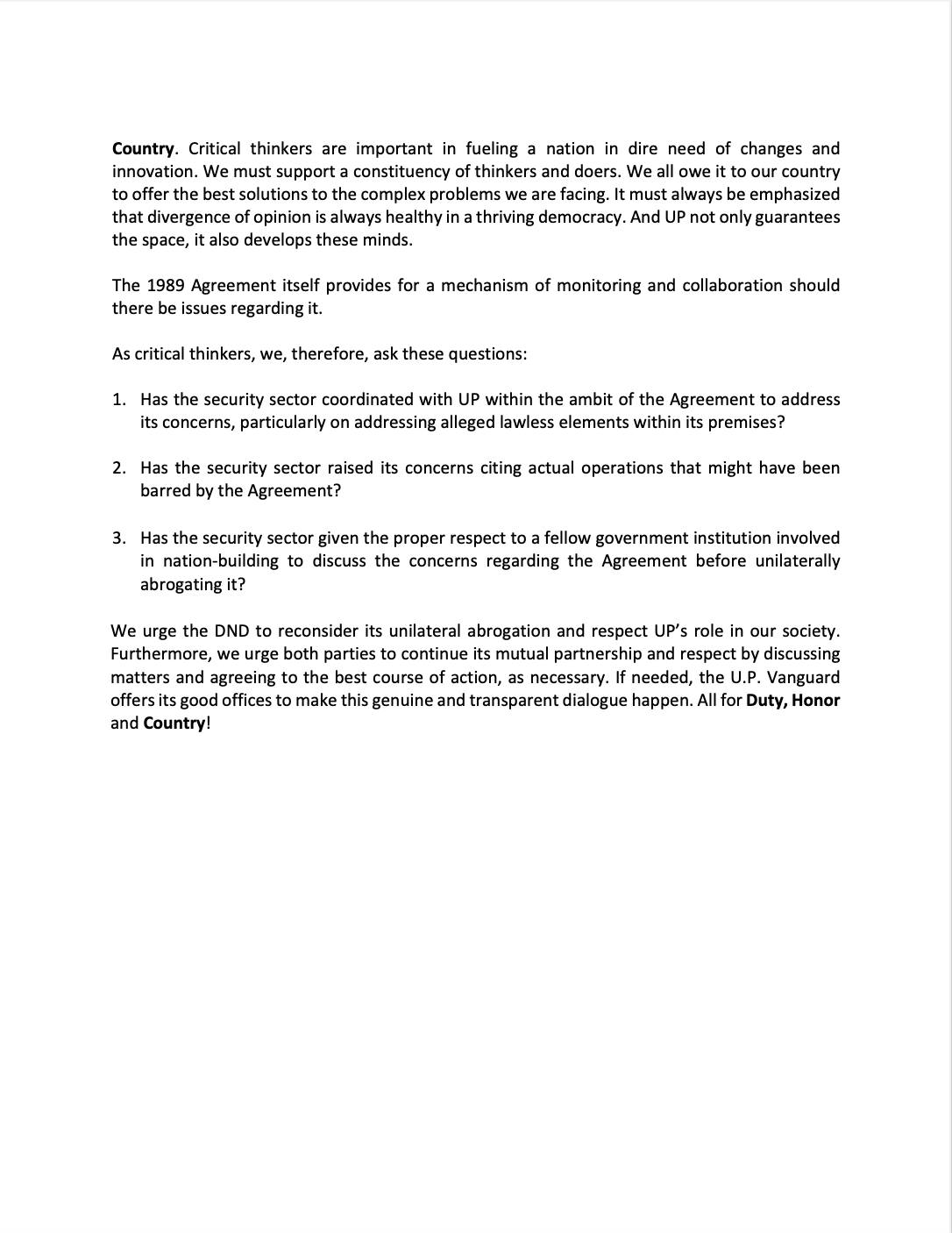 Where did I say this? Are you even understanding my posts?

How many times do I have to say “UP deals with frat violence”? Why can’t they do the same with terrorist recruitment?

So it appears the “gardening” was actually a project of then-Vice Mayor Joy Belmonte. 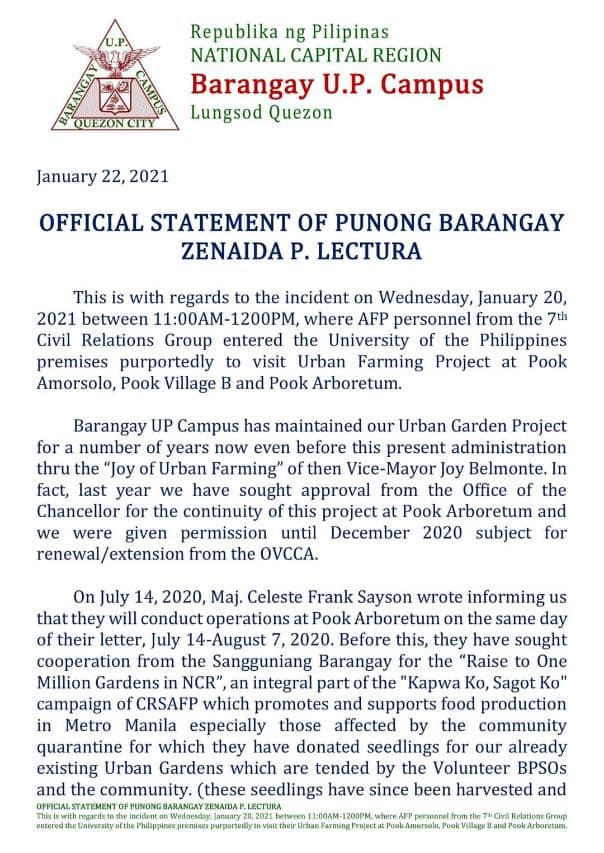 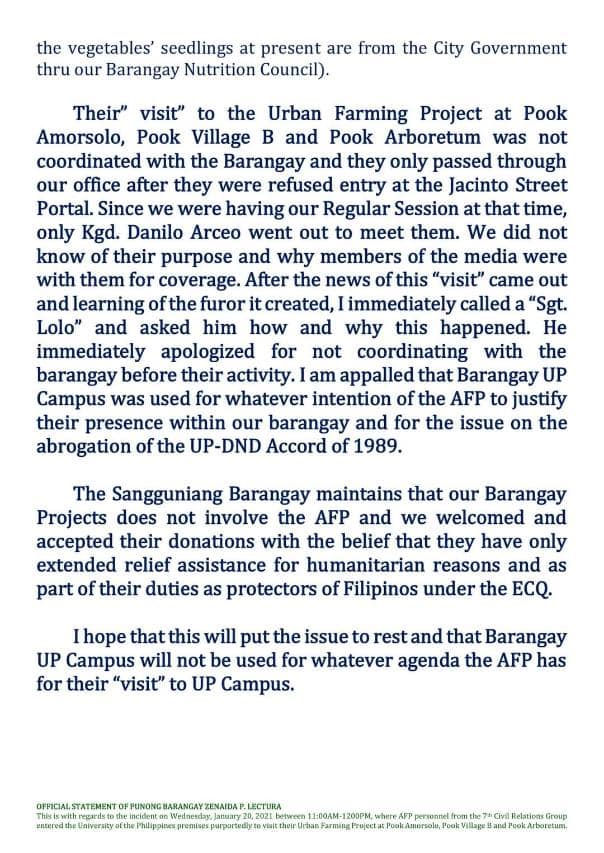 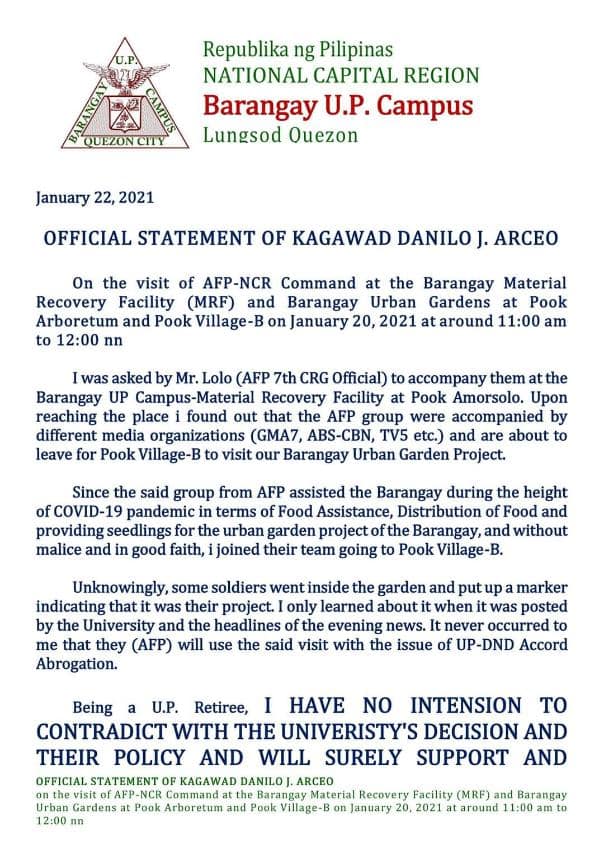 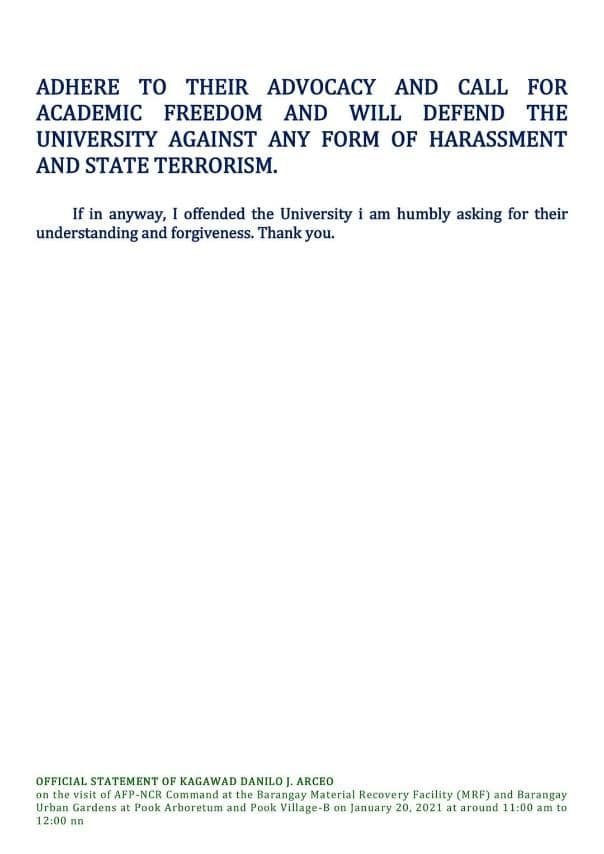 May statement pala ang Vanguard regarding the abrogation? Pleasantly surprised to see this. Regardless of the reasons of the DND, I don’t think this event has no political color behind it. Tingin ko it’s more political than it really is, IMHO.